The UK market for video games between January and December 2019 was valued at £5.35bn, an overall drop of -4.8% on the previous year’s record-breaking results. This finding comes as the industry finds itself on the cusp of a new generation of console hardware and, as with previous transitional periods, consumer revenues are reflective of a market of expectant of the next big thing.

2019 proved to be a varied year for the sector, with each of the three main areas of game software, game hardware and game culture each with a different story to tell. Game software saw a pause in the growth trend of the recent years, with revenues plateauing and a small -2.1% drop to £3.85bn. Hardware saw a slower year, with a -14% decline to £1.35bn, mirroring demand for last-gen consoles. However, broader interest in games continues to grow with UK audiences, with game culture revenues climbing +28.5% to £146m. 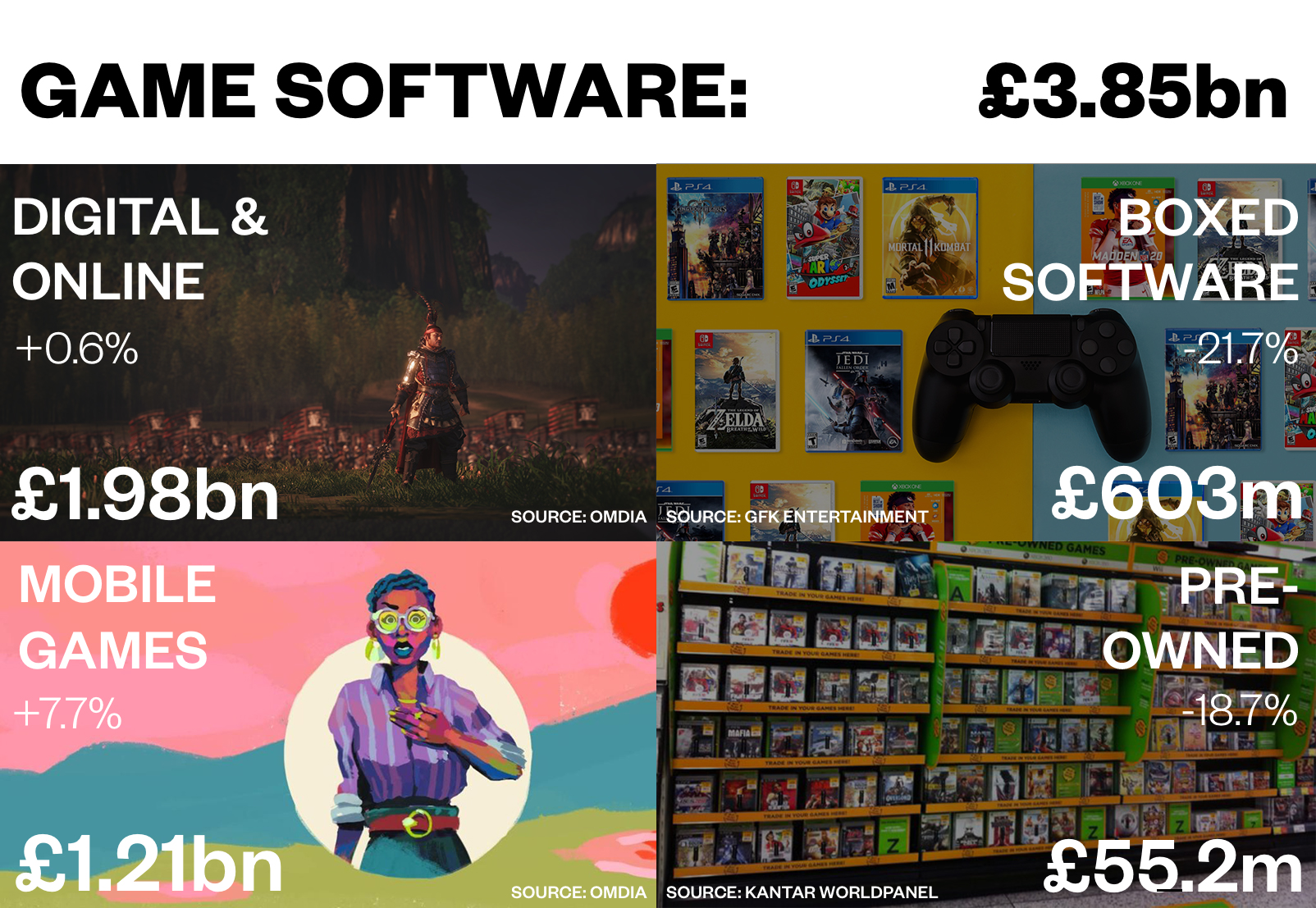 Within the software market, data from Omdia (previously known as IHS Markit) showed that digital and online revenues maintained their 2018 peak, with a small +0.6% year-on-year increase to £1.98bn. Described by Omdia’s Senior Games Analyst, Steve Bailey, as “in a year where PS4 and Xbox One have clearly entered the latter half of their lifecycles, it is testament to the maturity and commercial sophistication at work”, digital PC and console revenues now comprise 51% of the overall UK game software market.

Mobile game revenues also saw a positive year, continuing the growth trend of recent years, up +7.7% to £1.2bn, thanks in part to the ongoing success of mature titles such as 'Candy Crush', 'Clash of Clans' and 'Roblox' continuing to lead the top-performers. However, as we look to 2020 we may expect to see an evolution in mobile content, with Omdia Analyst Louise Shorthouse predicting that  “with mobile esports and more immersive, engaging experiences driving the global market - starting with Asia - these trends will begin to impact the UK scene”.

Further insight from Kantar’s Sam Causley explains “while online vs shop channels shares remain almost identical year-on-year, the high street remains the main source of spend for mint games. However,  Amazon grew to be the biggest individual retailer in mint games accounting for almost a quarter of share”.  Again the console cycle is a factor here, as Causley clarifies, “In what has been a fantastic year for the Switch, increasing their market share of mint game software spend to over 30%, Nintendo benefit this year from sitting outside the console cycle of both PlayStation and Xbox” 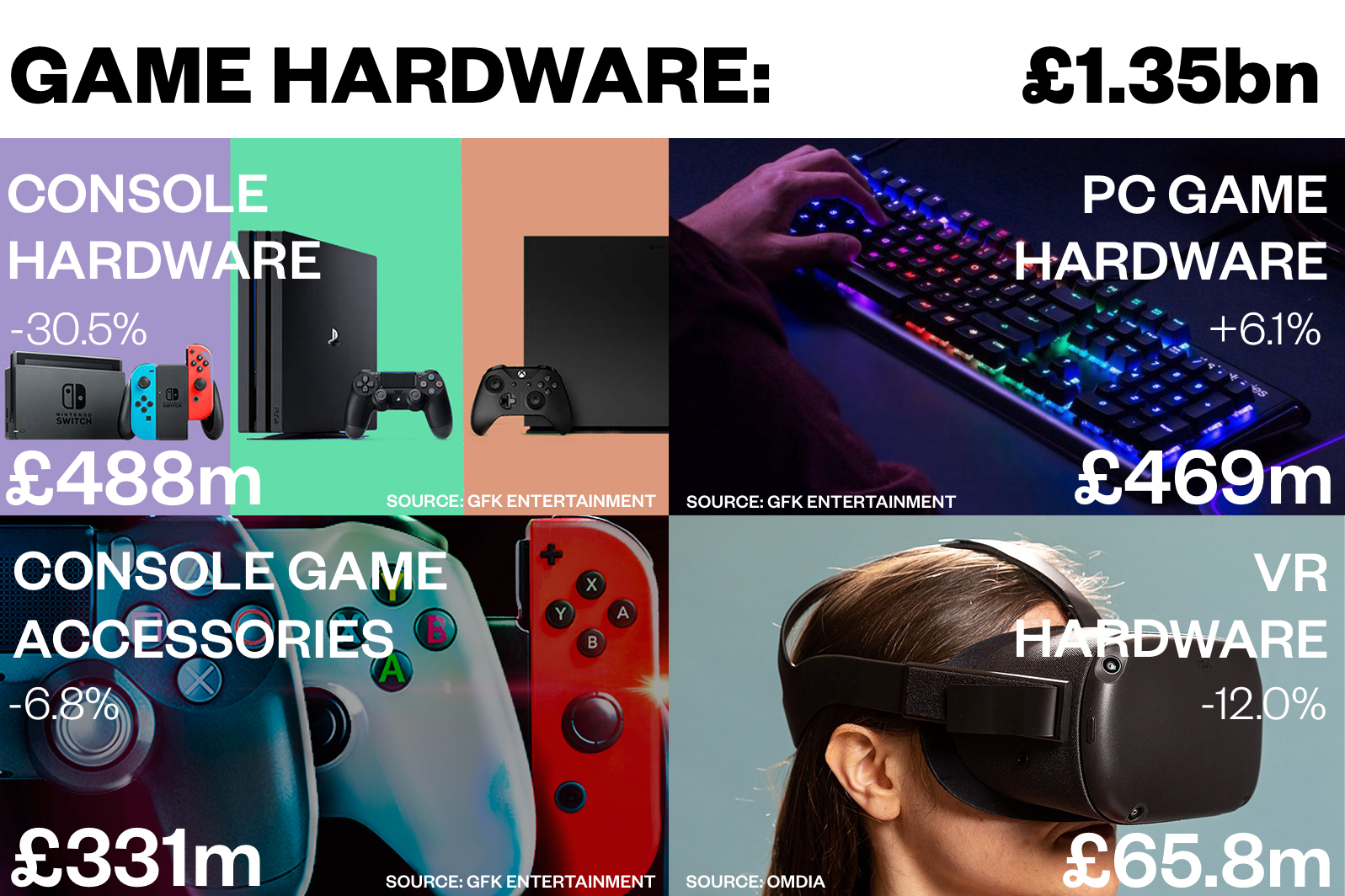 The impact of the changing console cycle is perhaps clearest when looking at console hardware revenues, down -30.5% in 2019 to £488m, according to data from GfK Entertainment. GfK data also showed a related drop in console game accessories, although less dramatically at -6.8% to £331m. Separate to these however, PC game hardware enjoyed a steady +6.1% growth to £469m, again via data provided by GfK.

While overall VR hardware revenues saw a -12% decline to £65.8m in 2019, the story behind this rapidly developing sector is more complex, with new standalone VR headsets entering the market, described by Omdia’s Steve Bailey as “a star performer”. He further clarifies “While other VR categories saw decline in both value and volume terms, standalone began to see the ramp-up that’s long been expected of this best-case format. In the UK, unit sales doubled for standalone, and the imminent release of Valve’s Half-Life: Alyx is seen as a possible watershed moment”. 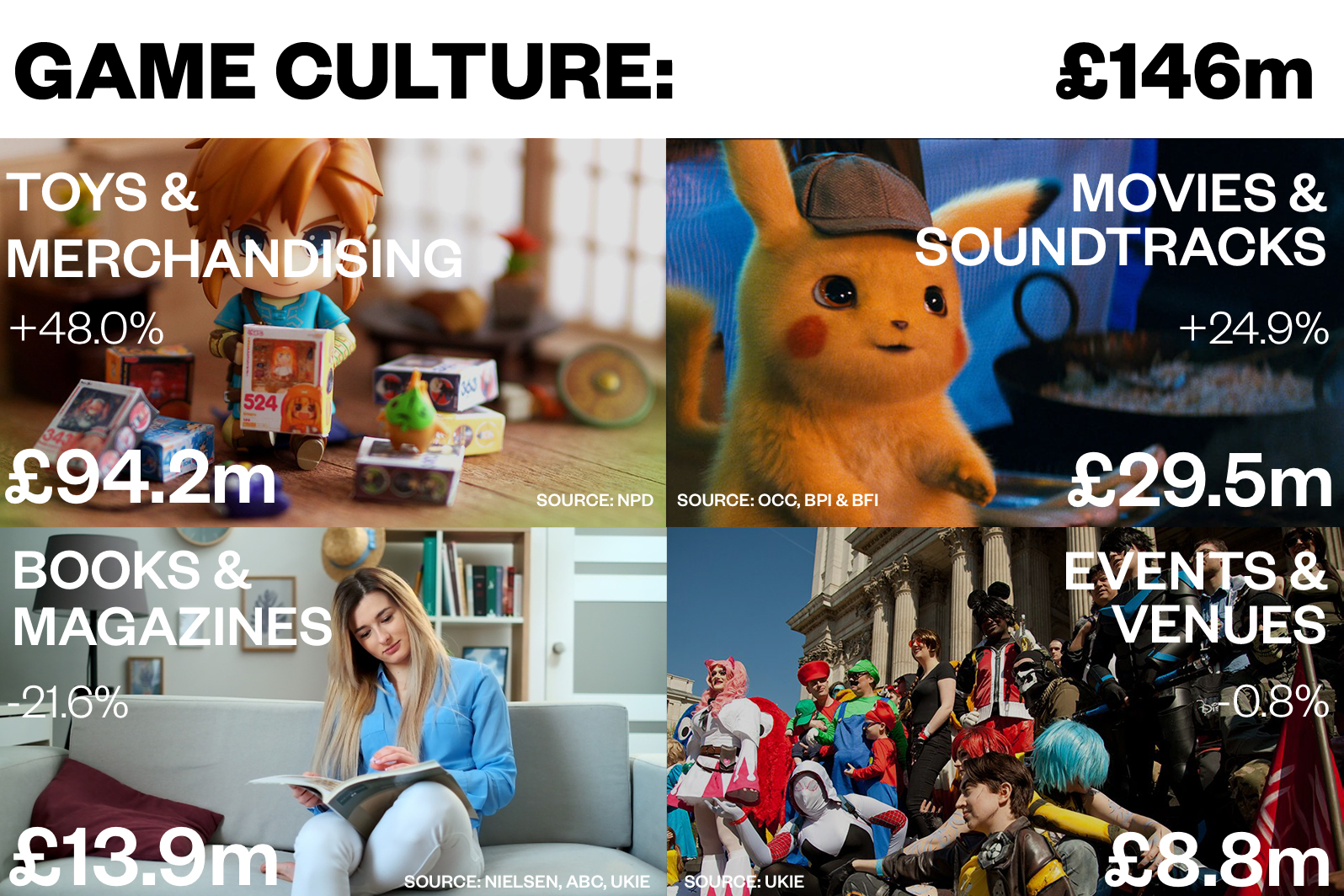 Looking at the broader impact of games within culture, it’s clear that demand for game-related experiences and products remains in good health. Game-related toys and merchandising revenues saw their first boom year since the closure of Toys-R-Us, increasing +48% in 2019 to £94.2m, with 'Fortnite'-related toys playing a major role according to data provided by NPD.

Game-related films, video and music also enjoyed a successful year, with the smash box office returns for 'Detective Pikachu' helping drive revenues up +24.9% to a combined £29.5m, according to data from the BFI, BPI and Official Charts Company.

As with previous years, tentpole franchises like 'Pokémon' and 'Minecraft' were key to game-related book revenues, however declines in physical demand and the shift to digital’s impact on magazine revenues saw an overall drop of -21.6% in game-related books and magazines to £13.9m, combined data from Nielsen Book, ABC and Ukie's own research showed.

In total, while the UK games market saw a small decline in 2019, at £5.35bn in revenues it is clear that even in this transitionary year into the new console era, games remains one of UK consumers’ most important entertainment sectors.

Looking ahead to 2020, it is difficult to predict where the market will end up. While the shift to new hardware is likely to spur spend, the global impact of coronavirus on both consumer habits and industry production is not yet clear.

That infographic in full: